At the S4C ride last May we heard Andrew Gilligan mention that QW 38 from Bloomsbury via Islington to Hackney would have priority. This route is now named QW 2!

The image shows the route proposed by Sustrans and TfL

You can also see the route of several QEWs on Google Maps at:
https://www.google.com/maps/d/edit?mid=zp87MfWRhyBk.kRHc5QlccN2c

QW2 is shown as a turquoise line labelled "Possible Bloomsbury to Walthamstow Quietway".

Camden Council is now consulting on some minor measures they propose for improving the stretch in Camden along Calthorpe Street and Guilford Street. These can be seen at:

To summarise specific (from west to east):

- raised table at the junction of Guilford Street and Grenville Street

- between Phoenix Place and Farringdon Road, reallocate some carriageway space for cycle lanes

general changes will include:

Please provide your comments in the associated thread 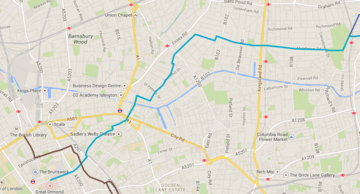